You are here: Home / Can Robert Lewandowski win this year’s Ballon d’Or ahead of Messi and Ronaldo?
Spread the love 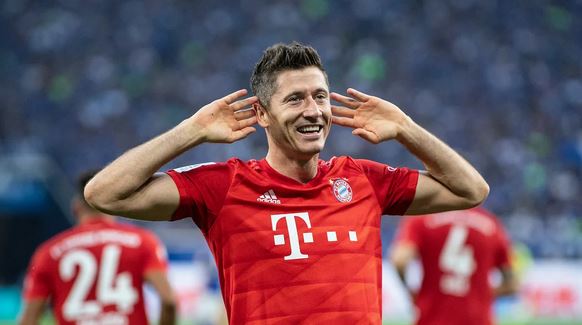 Bayern Munich Goal Scoring Machine has been on fire this season banging lots of goals for his club, taking this season’s goal tally to 51 goals in 43 games across all competitions.

Due to his current form there have been speculation regarding if he can win this year’s Ballond’Or and break Messi and Ronaldo’s competition for most Ballon d’Or holder.

The German champions’ coach Hansi Flick certainly thinks so. Flick said that due to his current achievement in the club this season following his individual award following Bayern’s DFB Cup Final win over Bayer Leverkusen. He said that there is no doubt that Lewandowski can win the prestigious award.

Those criteria are laid down by France Football magazine, who dreamt up the prize in the mid-1950s. Individual achievement goes hand-in-hand with club success: after Lewandowski’s 2019/20, you would be hard pushed to find a better candidate.

The Poland Striker is the Bundesliga’s all-time leading foreign-born goalscorer, and has been finding the net with incredible regularity since arriving in Germany in 2010 – once every 122 Bundesliga minutes over the last decade – you could be forgiven for thinking you had already witnessed peak Lewandowski.

But Bayern’s prolific Pole has just enjoyed his best-ever Bundesliga season – plundering a record 34 goals to win his fifth Torjägerkanone – to fuel his club’s canter to an eighth successive league title, and he netted twice to help them lift the DFB Cup and complete a domestic double.

His six goals in that competition made him the leading scorer, and he has 11 in the UEFA Champions League, also a 2019/20 all-comers’ best. That means he has scored 51 goals in just 43 competitive games this season, a breathtaking feat no-one else in Europe’s top five leagues can boast of.

Bayern won  their Last 16 first-Leg match against Chelsea Stamford Bridge, and if they win the Champions League to complete their second-ever treble – and should Lewandowski fire the goals to get them there – the volume of the voices backing his Ballon d’Or claims will be turned up to max.

It has been 24 years since the Bundesliga could boast a Ballon d’Or winner with Matthias Sammer coming top of the poll of respected football journalists from around the world while a Borussia Dortmund player in 1996.

Former Bayern goalkeeper Oliver Kahn came third in 2001 and 2002, Franck Ribery was third after the 2012/13 treble, while Lewandowski’s teammate, Manuel Neuer, also popped up on the last step of the podium in 2014 after backstopping Germany’s FIFA World Cup win in Brazil.

51 goals in 43 competitive games so far – Robert Lewandowski has had the best season of his career with games still to be played.