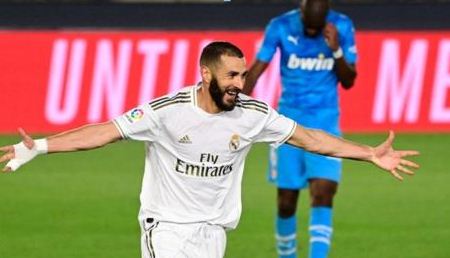 Karim Benzema has now Scored 243 goals in all competitions for Real, topping Ferenc Puskas’ in the list of Real Madrid All-time Goalscorers and moving to fifth place..

Benzema’s first goal was a stunning late volley which was set up by Eden Hazard.

Karim Benzema’s second goal, which came deep into the second half, was a superb piece of skill, involving a flick and volley which caused manager Zinedine Zidane to put his head in his hands in disbelief.

Benzema’s volley goal was a contender for goal of the season and confirmed his place among some of the greatest strikers in Real’s history.

There was plenty of positives for Hazard too – his partnership with Benzema is blossoming and his assist for the Frenchman’s first set Real on their way.

And it was Valencia who thought they had struck first at the Alfredo di Stefano Stadium – Real’s training ground – when Rodrigo had a goal ruled out for offside by VAR.

The result means Real Madrid sit two points behind Barcelona in second place ahead of their next game on Sunday away to Real Sociedad, while Barcelona travel to Sevilla on Friday.