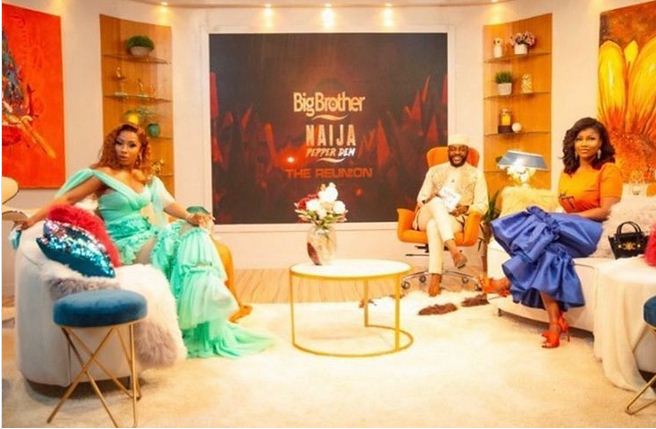 Big Brother ‘Pepper Dem’ Reunion show, Day 10, was graced by the presence of the two most controversial and entertaining housemates of the Big Brother Naija Pepper Dem season; Tacha and Mercy.

It was an open discussion throughout the show with both ex-housemates giving their overly active fans some insight into their relationship.

Ebuka began by recalling what occurred on that fateful day where Tacha and Mercy had a disagreement. He asked why things escalated and why Tacha got violent. For Tacha, she noted that the pressure finally got to her. It was a week to go and she finally reached her breaking point.

He also wanted to know if they have put things right in their relationship since leaving the house, but Mercy said they’ve been too busy chasing their respective careers.

In response, Mercy said she doesn’t believe in having a relationship with Tacha on social media, yet on ground, they are not cool. The BBNaija ‘Pepper Dem’ winner stressed that she calls Tacha, to speak to her from time to time, but gets the feeling that they are cool. She however expressed displeasure that on social media, Tacha is in the habit of ‘subbing’ her or liking posts that does same. For her, she would never do this to someone she calls a friend.

Tacha insisted that she never subbed Mercy or threw shades at her, claiming that she is not in charge of her social media account.

At the end of the show, Mercy proposed a dialogue with both ladies to clear the air. One between both of them; with no cameras and no followers. Ebuka agreed and stated that it would be good for their individual brands.