You are here: Home / The Presidential Villa Of Many ‘Presidents’:Who Calls The Shots?
Spread the love 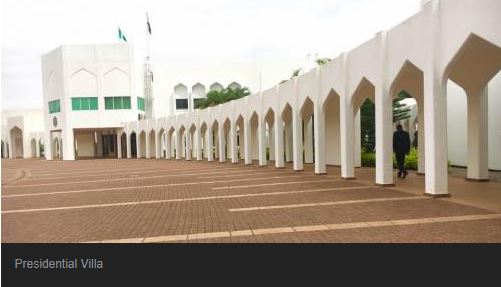 History as they say is the study of the past specifically the people, societies, events and problems of the past  as well as our attempts to understand them. It is a pursuit common to all human societies in the case of Nigeria, bad history often repeats itself; good history rarely does. This best explains what plays out in the Presidential Villa between:

Nigeria is plagued with leadership problem.

A recurring situation whereby the electorates voted a president into office only for the office to be hijacked by other ‘presidents’ who were not actually voted for cannot longer be tolerated. It was former President Olusegun Obasanjo who first made an authoritative submission of this ugly fact. He stated in his book published in 2014 “My Watch” that there were five presidents in Nigeria which in addition to Goodluck Ebele Jonathan—included Dame Patience Jonathan, Diezani Allison-Mmadueke Allison, Stella Oduah and Okonjo Iweala. Obasanjo averred that these women were even powerful than the elected president (Jonathan). This was the dreadful reality in the years of former President Jonathan’s Administration.

This is why the office of the Chief of Staff was keenly contested despite the fact the Constitution does not recognize it.

Now that Kyari is gone, power tussle is taking a new dimension.

The incidence of the contest of ego between Mrs Aisha Buhari and Sabiu Tunde Yusuf appalled me and many Nigerians.

The most unfortunate thing is that, unlike Jonathan Era, the other presidents in this administration are virtually from the same family.

It makes it look as if ‘Buharicracy’ is the system of government in operation because those who call the shots are his family members. The challenge is that this system of government (at least in principle) is absolutely not in the 1999 Constitution of Nigeria; even the ‘amended’.

Though I am not very sure who the most powerful president in Presidential Villa is after Kyari’s exit, some are of the opinion that it is Sabiu. Many others argue that it is the First Lady.

Some still believe it is Mamman Daura. While I really do not know, we shall wait to see who blinks first between the two ‘presidents’ (Mrs Aisha and Sabiu) in this tragicomedy. However, what seems to be certain is that President Buhari is not the most powerful. The reasons are not far fetched. One, under his watch as the elected president of the country, his wife whom he claimed belongs to ‘the other room’ is more visible than himself in the administration. The First Lady arguably does not belong to ‘the other room’. It is pedestrian to think so! Two, why did the First Lady and three of her children: Zahra, Halima, and Yusuf, accompanied by some of her security aides, led by Shugaba, storm the resident of Sabiu? If Sabiu has actually insisted not to proceed on 14 days self-isolation, is it not wiser for the first lady to report him to the husband (the President)? On this ground, many doubt if they really meet in ‘the other room’. This would have been a discussion meant for the ‘room’ and would have been resolved therein.

If not for her strong belief of being one of the ‘presidents’, how would the first lady dare to enforce the quarantine protocol in the Villa? Three, the inability of our elected President (Muhammadu Buhari) to wade into the issue and allowed this to happen under his nose is a gross display of incompetence, or at best, of not being in charge. Haha!

happened in the Aso Villa can be best read in story books or watched in war films. But unfortunately, it has become a reality show. No doubt, it has found its way into the history curriculum that will be taught to the unborn generations. As long as we continue to allow the Country to be run by unelected ‘presidents’, there are bound to be many somersaults on our many trajectories to economic development and political stability.

The harm has been done, nevertheless, President MuhammaduBuhari should prove to Nigerians, and to the world, that he is in charge. He should do so by clipping the growing wings of Sabiu Tunde Yusuf and his ilk within his administration. He should re-assert himself as a husband to Mrs Aisha, the First Lady, and possibly retire her to the ‘other room’ if she truly belongs to it. He should investigate, as the President, the trigger happy gun shooters within the precinct of the Presidential Villa and makethem to account for such violation. This is very important. If such is allowed to re-occur and becomes a norm, it will be difficult to discern the sound of terrorists’ gunshots from that of the Aide-de-Camps of the President or First Lady or Sabiu. It is unnecessary to act presidentially when one is not, and has the constitutional right to contest for the presidency. Meanwhile, Mrs Aisha and Sabiu should be patient and wait for their turn to contest for the position come 2023. Before 2023, about three years to come President Buhari should not only be seen as ruling the Country de-jure, he should also be seen as the man in charge. He has three years left to right the wrongs of his government and leave behind an enduring and a good legacy. We direct our prayers to Almighty God to help Mr President to discharge his duty responsibly.